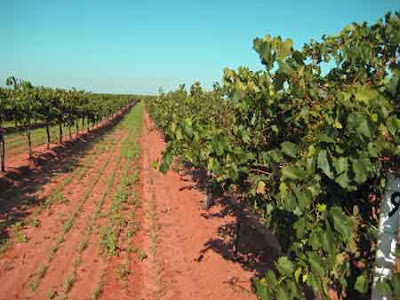 COONAWARRA? RIVERLAND? BOURKE? NOPE. TEXAS HIGH PLAINS…SCORCHED EARTH MONOCULTURE? GRAPEYARD?
by PHILIP WHITE
So who can learn from Maynard?
Texas, that’s who.
Texas has up and got Coonawarra envy.
Another freaky blog in the Jesus’ birthday period came from Houston wineslinger, Doc Russ Kane.
His scholarly piece is at vintagetexas.
I reckon I met Russ and his wife Delia Cuellar over a pit in the Flinders Rangers the year the Space Shuttle exploded. The pit had three big kangaroos in it.My brother Joe McKenzie, senior man of the Adnyamathanha nation, was showing the visiting wine and food writers how to cook roos. He was burning the hair off ’em with a eucalypt fire.
When you burn the hair off kangaroos it stinks.

“Oooh Ma Goodness!” hollered the lady. “Wheredjouwall learn to do that?”

Joey looked at me incredulously.

“Looked it up on the internet, Missus”, he said, expertly flipping the roos by their tails.

Before Texas goes too far down the track of emulating Coonawarra, or, similarly, our Murray-Darling Basin, it might take moment to get on the internet and read CADUCEUS and Wine Biz On The Nose, an angry diatribe I hissed onto this site on NewYear’s Day.

“Terroir: A ‘Land – Man’ Conjunction” was the headline that caught my eye. Doc Russ had been up on the Texas High Plains to observe the grape harvest.

“The scenery is dominated by red-brown dirt and sky that gives me the feeling that I was viewing the land that was created very early on the morning of third day of creation. This was before God had yet worked up the idea of making high mountain vistas on the newly created land,” he wrote.

“I also had the impression that this was a very special place….land made of natural elements but where uniquely human elements of grit and determination had been applied”, he continued.

“This region was first used for open range cattle grazing. New technologies – barbed wire and windmills – first looked at with suspicion, led to improved herds and eventually sustained the region’s agriculture boom of corn, cotton, and soybeans. We are now in the offing of a potentially new boom time … for wine grapes.”

Neal Newsom, a grapegrower, added “[We have] red sandy loam on top of caliche limestone, which is typical on the Texas High Plains. It is a perfect, disease resistant soil for grape growing since the red sandy soil has good mineral content and drains rapidly. The underlying caliche allows the roots from the vines to easily penetrate deep underground. It also holds on to the moisture draining through the top soil throughout the year, even when the vine are dormant. This can give the vines a source of water that they can use all year long.”

What’s he talking about? Coonawarra? The Murray Basin? Nope. Texas. But he makes the connection:

“The Coonawarra, the most sought-after vineyard soil in Australia, known as Terra Rossa (red earth). It is located in South Australia, some 375 kilometers (230 miles) from Adelaide and slightly further from Melbourne. This fertile soil’s unique rusty-red color is due to its mineral content of iron oxide. It covers bedrock of porous limestone, assisting good drainage but offering summer moisture retention. This has made Coonawarra one of the greatest regions in the world for growing Cabernet Sauvignon. These conditions produce low-yielding and intensely flavored grapes, helped along by the climate of long dry warm autumn days and cool nights during the key ripening period.”

It is this very terroir that makes the Coonawarra little different from the rest of the sedimentary Murray-Darling Basin. Only Coonawarra’s proximity to the sea makes it different. Otherwise, it’s mainly been over-irrigated, minimally-pruned, scorched earth, grossly overyielding monocultural grapeyards that look and feel more like the Nuremberg Rallies than a garden for food.

Just like our Riverland. Which is cactus. You don’t mention ‘boom-time’ in Coonawarra or the Riverland these days.

“Is it any wonder why our very own Texas High Plains ‘Tierra Roja’ has produced rich, full-bodied Cabernets?” Russ asks. “How these particular soil conditions developed on the Texas High Plains and in Coonawarra may be different, but the results are undeniably similar. There are now about 13,590 acres of vineyards planted on the Australian Terra Rossa, half of them dedicated to Cabernet Sauvignon. We have only 3,900 acres planted in wine grapes in all of Texas. Now, the task is ours to work with these special soils to expand and optimize vineyard production and bring these wines to play a great performance on the world stage.”

Coonawarra and the Riverland are as close as Australia’s ever got to that other peculiarly American metaphor Ross aptly includes in his considered piece: the corn boom.

Interesting take on my VintageTexas blog on the comparison of the Austalian Coonawarra terra rossa and the Texas High Plains Tiera Roja.

The comparison is not so crazy. I understand that a part of the Coonawarra “terroir” is the proximity to the sea and the cooling effects that this brings.

Texas does not have approximity to a cool body of water. While it has the Gulf of Mexico, it is more like hot bath water most of the year.

But, Texas does have the slant in its favor going from east to west of about 5000 ft. (sea level in Houston on the east and 5,000 ft in west Texas.

The Texas High Plains has a warm dry climate but the elevation provides the nighly cooling and recovery of the grapes, slowing ripening and enhancing the qualities of the grapes.

The other connection, made totally separately from the Coonawarra experience, is the ability of the Texas High Plains to produce the most characteristic Cabernets in the region on par with those from other fine wine producing regions.

Up unil now, this has been our best kept secret.